What You Need to Know About Child Support

A: Generally, the law requires a parent paying child support to make those payments until (1) your child is no longer a minor, unless the child has special needs; (2) the child becomes active-duty military; (3) your parental rights are terminated through adoption or another legal process, or (4) your minor child is declared "emancipated" by a court—that is, declared an adult earlier than normal because of the ability to be self-supporting.

Q: How does a custody decision in a divorce affect child support?

A: Both parents have responsibility to support their children financially. When a divorce occurs and one parent has physical custody of the children, that parent's responsibility is fulfilled by being the custodial parent. The other parent then makes a child support payment which fulfills that non-custodial parent's financial responsibilities. In the case of joint custody, the amount of child support each pays is normally calculated by the court considering the percentage each parent contributes to the couple's joint income and the percentage of time each parent has physical custody of the children.

Q: If you were never married to the child's mother, do you still have to pay?

A: Yes. The obligation to support a child is not conditioned by marriage. If you are a parent, you have responsibility to financially support your offspring. Your parental responsibilities can be legally determined either through your acknowledgment that you are a parent, by the fact that you had welcomed the child into your home as your own, or as established by a paternity test. State laws vary somewhat on the definition of a parent, so if there is some doubt about your parentage, you will want to consult with a family law attorney in your state.

It also happens at times that a man who fathered a child may not be asked to pay child support until the child's mother receives public assistance. In that case, the government may come to the father seeking back child support to reimburse the government for their assistance payments. Many fathers have been "blindsided" by these orders many years after the fact.

Q: Is a stepfather legally required to financially support his wife's children?

A: No. However, if he legally adopts the children and thus terminates the parental rights of the biological father, the stepfather becomes liable for their financial support.

Q: How is the amount of child support determined?

A: Each state in the United States is required by federal law to establish guidelines that are used to calculate child support due from parents based largely on their income and expenses. Because states have a fair amount of discretion in setting these guidelines, child support payments required vary widely between states, even under the same circumstances. But normally, the courts will take into account issues like the standard of living of the child prior to divorce, the specific needs of the child, the resources of the custodial parent and the non-custodial parent's ability to pay. Because in most states judges are allowed wide discretion in setting these payments, it is important for a non-custodial father to get as much information on the table with the court up-front to make the payments are fair as possible.

Q: Does my ability to earn enter into the calculations?

A: That depends on the judge and the circumstances. But generally, a child support payment would not be reduced if a father quit a full-time job and returned to school. If he became unemployed and then took a lower paying job, a reconsideration of the amount of child support due might be appropriate.

Q: What happens if I don't make my child support payments as ordered?

A: This is called big trouble. The court order defines the amount and payment schedule. Failing to meet the schedule is seen as defying an order of the court and could land you in jail, result in a garnishment of your wages, intercepting your tax refund, seizing property, suspending your business license or driver's license or other serious consequences. If you become unemployed or have some other extenuating circumstance, it is important that you begin the process immediately to have your child support amount modified. In most cases, the law prohibits a judge from retroactively reducing a child support payment, even if a reduction is reasonable after the fact.

Q: How can I change child support payments that are no longer fair?

A: Only the court can change a mandated child support payment, so any modification would have to be submitted to a judge. If both spouses agree on a change, it is usually a pretty simple process. When you don't agree, the request will be submitted by your family law attorney for a hearing. The spouse who wants to make a change over the other's objection has the burden to show what has changed and why a different amount (higher or lower) should be required. Temporary changes might be result of a medical emergency, a change in employment status or a short-term economic hardship on the part of the receiving parent.

A permanent change in child support is often considered when income changes due to a remarriage, either parent has a job change that affects ability to pay, or the child involved has new and different needs than were contemplated when the original amount was set.

Q: If my ex-spouse doesn't let me have visitation, can I withhold child support?

A: This is one of the biggest complaints of non-custodial fathers. Unfortunately, the answer is no. Child support payments and visitation are considered by the law to be totally separate issues. If your ex is not living up to the custody decree by providing visitation as required, you will need to go back to court to enforce the court order. You have an obligation to financially support your children, regardless of any visitation issues.
Posted by Alex Rizada at 2:56 AM 31 comments: 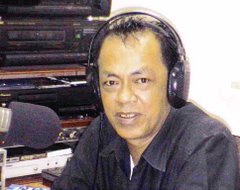 Welcome to this new world of
Life After Marriage or "Buhay Hiwalay".

"If you think that getting married is a life to dream about, then be prepared to live a life after marriage for it is far more dramatic and challenging experiences to contend with."

I'm Alex Rizada, born 1958 in Cebu, Philippines. My parents were separated at my age of two. I was adopted by my Aunt and we migrated to Metro Manila where I finished my studies at the University of Santo Tomas with a degree in Bachelor in Philosophy and Classical Arts. I further pursue my studies at the Asian Social Institute with a course on M.S. Sociology and had been employed in Radio Veritas Asia as researcher and broadcast journalist. I got married in 1988 and after ten years, my wife and I were separated. By now, our children was in her custody while I continually provide their needs even without the benefits of divorce, annulment and legal separation. This is what makes me inspired to blog and share my experiences, views and feelings after many years in a Life After Marriage.

A Collection of articles, studies, videos on Men's Health, Lifestyle, Sexuality and others

Are You In Favor for Having a Divorce Law in the Philippines?

Prayer for Strenght and Courage

Dear Lord of grace and mercy,
Gives us the strength to move on,
and the courage to let go.
A strength to follow Your Will,
and courage to forgive and ask Your Mercy.

Give us the strength, O Lord,
To stand alone and the courage to trust in You.
The strength to love and courage to be loved.

For we know, O Lord, what it takes the strength to survive,
But only with Your Grace, dear God, can we take
the courage to rise and live a whole life anew.

JESUS, I TRUST IN YOU.

Facts on Divorce and Separation

Divorce and Remarriage From Christian View

Moving On as Single Father